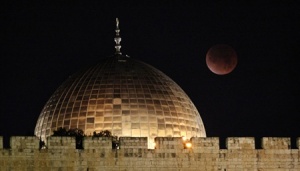 There will be four blood moons, one total eclipse of the sun, darkening the sun completely and one partial eclipse of the sun in 2014/2015 and each of them will fall on Jewish Feast Days and these will be the last for this century. All of this is according to the Jewish Lunar Calendar and Nasa’s Lunar calendar, but, not according to our Gregorian calendar. We would all miss these facts if they were not revealed to us by Mark Biltz of Shaddai Ministries. These events are no small thing considering what has occurred in Israels past when Blood moons have landed on Jewish Feast Days.

Mark 13:24 – 46, “But in those days the sun shall be darkened (eclipse) and the moon shall not give its light (eclipse) then shall they see the Son of man coming in the clouds of heaven with power and great glory.”

It cannot be regarded as coincidence that all four blood moons of 2014/15 occur on religious festivals of Israel, together with two eclipses of the sun also on important days in 2015. A blood moon will occur on the 14th day of Nisan in 2014, when the Passover will be celebrated in Israel (Leviticus 23:5). Nisan is the first month in Israel’s religious calendar. On the 15th day of the seventh month (Tishri) when the Feast of Tabernacles begins (Leviticus 23:34) there will be another blood moon.

Exactly the same pattern will be repeated in 2015. Because of Israel’s lunar calendar these dates all coincide with the full moon – on these occasions the moon will become blood-red. Apart from the lunar eclipses there will also be two eclipses of the sun in 2015… on the first day of Nisan and again on the first day of Tishri. The Rosh Hashanah (Jewish New Year) is celebrated on 1st Tishri, which is the beginning of their civil calendar.

2013 through 2014 will provide the leading events in the next 2014 – 2015 blood moons (tetrads) that are predicted to occur The eclipses of the sun and moon confront us with precise dates which cannot be manipulated…! Nevertheless, these signs should not be seen as an attempt to date-setting for the Second Coming of Christ but rather as a wake-up call to be ready for what may happen in the near future. Now is not the time to lapse into spiritual slumber like the Matthew 25 foolish virgins.

There will be a string of four “blood moons” in the year 5775, and one of them will shine over the Passover seder. Whenever this happened in the past, enormous events took place in Jewish history.

It starts with the Book of Joel, Chapter 3:3-4: “And I will show wonders in the heavens and in the earth, blood, and fire, and pillars of smoke. The sun shall be turned into darkness, and the moon into blood, before the great and terrible day of the Lord come.”

The verse about the sun turning dark and the moon turning to blood, is at the center of a new, hot, Christian bestseller titled “Four Blood Moons,” by Pastor John Hagee. It is based on a discovery by Pastor Mark Biltz, who runs a “Hebrew roots” ministry in Tacoma, Washington: Red Moons. Biltz’s website declares: “We do not want to convert Jews to Christianity or Christians to Judaism,”.

He based his observation on the verse in Genesis 1:14: “And God said, Let there be lights in the heaven to divide the day from the night; and let them be for signs, and for seasons, and for days, and years.” God originally plans to use the heavenly lights as signs, and the prophet Joel foretells that a blood moon would mark the day of the Lord – then it stands to reason that dramatic things should be taking place when a blood moon is up in the sky. The science of the “blood moon” phenomenon is fairly simple. It is created by a partial lunar eclipse. When the Earth’s shadow covers the moon completely, we get a total eclipse. A partial lunar eclipse happens when the Earth’s shadow covers the moon only partially. The earth atmosphere bends light around its edge, and scatters out shorter-wavelength light (green through violet), leaving longer-wavelength light (red, orange, and yellow) in the Earth’s shadow. This is also why sunsets and sunrises generally appear red. As is the case with most miraculous events that can be explained scientifically, the miracle is not in the natural phenomenon, but rather in its timing. So the Book of Joel describes solar eclipse, followed by a partial lunar eclipse, as precursors of the Day of the Lord. The prophecy in Joel, like most prophecies, is surreal, beautiful, and open to many interpretations. But we can take away from it the notion of a blood moon as a sign, and check out the calendar for the next bunch of partial lunar eclipses.

Pastor Biltz looked at NASA’s tables for solar and lunar eclipses and found a string of lunar and solar eclipses happening in 2014 and 2015 and then nothing like it for the rest of the 21st century. In 2015 there will be two solar and lunar eclipses two weeks apart (on the new moon and full moon) one in the spring and one in the fall. This will produce four blood moon eclipses in a row. This is amazing because they all fall on Jewish Feast days.